Banker to the Poor

by Muhammad Yunus with Alan Jolis 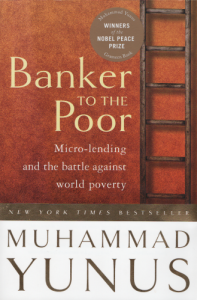 Banker to the Poor is the story of Professor Muhammad Yunus, a Bangladeshi university lecturer, and the Grameen Bank, the micro-credit organisation he set up as a means of allowing the poorest of the poor access to the tiny sums of money they need to set up their own businesses and work their way out of poverty. The remarkable success of the concept was recognised in 2006 when the Nobel Peace Prize was conferred on both Yunus and the Grameen Bank.

Originally published in 1999 and updated in 2003, the book charts both Grameen’s and Yunus’s own progress from the very earliest days, starting with Yunus’s birth and childhood as the third of fourteen children in a fairly well-to-do Chittagong family, his time as a student in both Chittagong and (as a Fulbright Scholar) in the US, and his part in mobilising support for the fledgling nation of Bangladesh in the 1971 war against (West) Pakistan. But even in these early chapters, Yunus’s interest in entrepreneurship and his ability to identify the root causes of a situation are evident.

Having set the scene, it’s with the third chapter that the story really kicks off, with Yunus a lecturer at his alma mater, Chittagong University. Confronted with the appalling realities of the 1974 famine in Bangladesh, he realised that elegant socioeconomic theories were doing nothing to address the everyday problems faced by the poorest of the poor. Banker to the Poor tells how he dropped the “bird’s eye view” of academia and adopted the “worm’s eye view” of seeing what was going on in rural Bangladeshi communities – and how he challenged the convenient conventional wisdom of the political and banking elites, the vested interests and ignorance of the local bigwigs, and the fear and suspicions of the poor themselves.

All this might suggest that Yunus is using his book to blow his own trumpet. Nothing could be further from the truth. Certainly he praises his organisation’s workers, their enthusiasm and their resourcefulness, just as he pays tribute to the efforts of the poor themselves to lift themselves out of abject poverty and into a better life. And he advocates his ideas strongly. But he continually stresses – as he had to in the days when he was getting Grameen off the ground – that personalities are irrelevant and that the enthusiasm, resourcefulness and industry are available anywhere in the world.

It’s an enthralling story and, for a book that’s about a world-changing idea, it’s a surprisingly easy read. Not just because the concept itself is intrinsically easy to understand – although it is, and that’s part of the beauty of it – but because it’s written in clear, straightforward language, peppered with anecdotes from Yunus’s own story and examples of how the Grameen Bank and the micro-credit concept have helped people in Bangladesh, across the developing world and, increasingly, in developed countries too. And you don’t need a degree in economics or management-speak to read it and understand it.

Banker to the Poor is a little over 260 pages long (in its US edition, which is the one we bought), and it’s evident from virtually every one of those pages that Yunus is deeply committed to working to improve the lot of the poorest. Yet for all that, the book’s free of sanctimony – although Yunus doesn’t shrink from sharp criticism of the people and organisations who have obstructed the Grameen concept’s development over the years, from Bangladeshi government officials to the bosses of the World Bank. This is not a patronising “lord of poverty” (to borrow the title of Graham Hancock’s 1989 work), determined to give the poor what he thinks they ought to have whether they like it or not. Yunus respects the people below the poverty line as human beings who could change their own lives for the better if only they were given the chance – and his life’s work has been about giving them that chance.

In short, it’s a thoroughly inspiring book. If you have any concern at all for the future of human society, and you haven’t read it yet, I urge you to. You’ll not be disappointed.

Banker to the Poor

3 thoughts on “Banker to the Poor”