Belgium doesn’t get much of a look-in when it comes to the world stage. Ask most Europeans, and they’ll think first and foremost of Brussels, and thus of the EU. If pushed, they might think of the odd famous Flemish artist, or Maneken Pis (there you are, you see – Brussels again).

You wouldn’t necessarily think of Belgium as a great destination for gourmets. Passing through it on the motorway, one thing you notice is that all the service area signs have an icon on them which looks like a little triangle with matchsticks poking out at the top. These are a representation of chips, the dish that Belgium’s perhaps most famous for, especially along with mussels. Don’t knock mussels; baked in breadcrumbs with butter and garlic, they’re heavenly.

But there are two food items that Belgium gives to the world which are probably unsurpassed anywhere. One of them is chocolates. (The Swiss might argue the toss over that one, and they might have a point as far as straightforward chocolate in bars is concerned. But they’d be struggling to come up with anything quite as wickedly luxurious as a box of chocolates from Leonidas or Godiva.)

The other, of course, is beer. The English and the Germans may think that their beer’s something to brag about, but when it comes to variety and quality, you’d be hard pushed to beat the Belgians, especially given the relatively small size and population of the country.

So we were delighted when, in late October 2006, we found that our local branch of Carrefour was stocking, not just one or two Belgian beers (they’ve always had a couple on the go – usually Hoegaarden or the three different coloured labels of Chimay) but about a dozen of them. Better still, the supplier was a local company based in our area!

This was too good a chance to miss. So we grabbed a couple of bottles of each (and more of some of them) and settled down to plan a couple of tasting sessions… 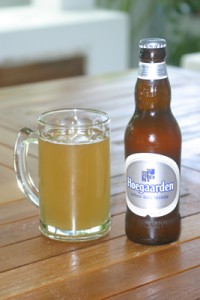 We started off with this one as a control; we’d been used to drinking it in the UK and France (in fact, the branch of Londis just round the corner from us used to lay it in – at 30p less than Sainsbury’s price – because we were regular customers!). So we had a good idea of what it ought to taste like, and whether it had been heat-damaged at all.

We were glad to find that it was every bit as good as in Europe, with no evidence that the journey had harmed it. It’s a light-coloured beer, perhaps the colour of dark champagne, and cloudy when poured as recommended – you’re supposed to pour two-thirds of it, swirl the bottle around to loosen the yeast sediment at the bottom, then pour in the last third. This also results in quite a large head, which stands for quite some time.

It’s quite a fragrant beer, too, even herbal, and this shows in the zingy, zesty flavour. Wheat beers often seem to have an almost banana-like taste to them, and there’s evidence of this; but there’s a bit more fruit and herb beyond that. The reason’s quite simple. Unlike Germany (or, strictly speaking, Bavaria) Belgium doesn’t compel its brewers to use just water, malt, yeast and hops, so during the Hoegaarden brewing process they add Curaçao oranges and some coriander! Anyway, it’s a lovely refreshing drink for a hot day.