A Tale of a Mad Dog and an Englishman, Ruins, Retsina – and Real Greeks 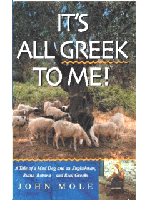 Peter Mayle really started something with A Year In Provence. I’m not just talking about the people who decided to go and buy ramshackle farmhouses in the South of France on the strength of what he’d written, but also of the people who’d already set up overseas in a Tom-and-Barbara-Good sort of way and who, seeing the success of Mayle’s book, thought to themselves, “I’ll have some of that…”

John Mole’s book is very much in the Mayle mould; largely, no doubt, because he starts off with a similarly ramshackle property in a similar traditional rural community. As the blurb has it, on the strength of a beautiful view and a local’s persuasiveness he buys a “tumbledown ruin on a hillside with no water, no electricity, no roof, no floor, no doors, no windows and twenty years of goat dung…” The passage where Mole finally succumbs to the blandishments of the village butcher, Ajax, and buys this shell of a building hark back strongly to Mayle’s own against-his-better-judgment purchase. If anything, though, Mole’s predicament is even further removed from the urban UK – even the UK of the late 1970s, when he and his family were contemplating their move to the Greek island of Evia (Euboea).

A further, bigger difference is that Mole’s family play a far bigger part in his tale than Mayle’s wife does in his. Mayle’s wife is merely a background figure in his books and is not even named (perhaps for privacy reasons – she is clearly present in many of the episodes Mayle describes). Mole’s wife appears by name as early as the prologue and is integral to the story, as are their four children. Depending on how much you like children, that may or may not endear the book to you.

Even without the children, though, there are plenty of colourful local characters to maintain interest. Mole clearly has a deep understanding of, and love for, the culture of the Greek community he lives in, which means that his explanations of some of the more alien (to a British reader) traditions and customs are all the more worthwhile. The great rites of passage of life are all dealt with, as are smaller details such as the traditional style of Greek farm building (fast disappearing even when Mole was repairing his), typical Greek cuisine, attitudes towards money and even drinking customs. Did you know, for instance, that it’s tradition to wear a flower behind your ear once you’ve had your first drink of the day?

Not a bad book, all in all – an easy read, with plenty of anecdotes and enough of a storyline to keep you going for a couple of days. As Mole makes clear in his epilogue, it’s not a story about modern life in Greece; things have changed a lot materially in the last twenty-five years. But it is an affectionate portrait of what made the Mole family fall in love with Evia in the first place, and what keeps them going back there every year.

It’s All Greek To Me