Since it was our first visit to Siem Reap and we were staying at Molly’s, it made a certain amount of sense to at least try the food. We’d been tempted by the daily specials on the blackboard outside when we first arrived, but had some trouble working up an appetite as the evening wore on and our stomachs grew fuller of beer. But our new-found friend Jan persuaded us to give the bar snacks a go. We weren’t disappointed – several tasty, tangy dips with fresh pitta bread really hit the spot! So we were quite looking forward to breakfast the following day.

Sure enough, the breakfast was everything that could have been wished for from an Irish guesthouse in Cambodia. The bacon and eggs were delicious. It’s not easy to find good beans when you’re used to Heinz beans as produced for the UK market, but Molly’s were fine – maybe they were Heinz? The sausage differed from the typical British/Irish breakfast in that it was all meat, rather than half breadcrumbs – very tasty. The tomatoes gave the only jarring note; they were quite tart! Still, if that’s what’s available in the markets, we weren’t about to complain over something so minor. 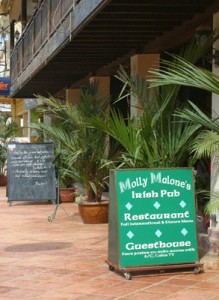 Encouraged by breakfast, we decided to stay at Molly’s for dinner on our second evening. In keeping with our adventurous decision to stay at an Irish pub/guesthouse for this holiday, we went for fish and chips (Kay) and pork chop (Dave). Both were beautifully presented and cooked to perfection; the chips were some of the nicest we’ve ever had anywhere.

Day Three was our big temple-visiting day. [See The Temples of Angkor] After our extensive labours, Dave was feeling a bit peckish so we headed back to Molly’s so that he could have a sandwich and a coffee. A BLT baguette was just what was needed!

On our final day, Dave (who was up earlier) decided to try the breakfast roll (bacon, egg and sausage on a half-baguette) for breakfast. This was a bit of a banker since the breakfast and sandwich earlier during our stay had been so good. No surprises here either – it was tasty and filling.

Very little to add to our last review; all the things we’d had last time round were as good as they had been before. (If anything, even better – the tomatoes at breakfast didn’t seem so tart!) However, we did try a couple of other items. Dave had an excellent stuffed pork in mustard sauce, which came with a lovely creamy sauce (using a mild whole-grain mustard) and beautifully-cooked fried potatoes. Our pal Don thoroughly enjoyed his shepherd’s pie. On two days in a row, in fact! And when we couldn’t face a full meal, the pork satay was a really tasty snack.

Sorry to be boring, but Molly’s is consistently good [edit: or rather, was – see Visit Four below]. Here’s a list of the meals we had during this visit:

Day One: Dinner – Kay had fish and chips, which were tasty as ever. Dave took a chance and asked for the steak with mushroom sauce… rare. The girl who took the order appeared to have misheard at first and repeated the order with “well done”, but was soon corrected. When the steak arrived, it was perfect: red in the middle, but not blue, and as tender and tasty a piece of meat as you could hope for. Wow! 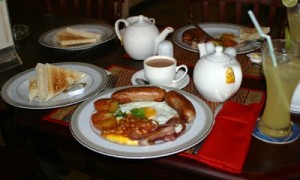 Day Two: Two Mega Fries for breakfast. The only minor gripe here was that the yolk of one of Dave’s fried eggs was broken during the cooking process, a fact which was carefully concealed by baked beans when the meal appeared. But the food itself was great. The teapots came with only one teabag each, which is never enough when you’re talking Lipton Yellow Label, but we asked for an extra teabag each, which was promptly and cheerfully provided.

Day Four: Dinner – We tried the shepherd’s pie which Don had enjoyed so much on our previous visit to Siem Reap, and a steak and Guinness pie. It was quite clear why Don had ordered the same meal twice – it was very tasty, with nice juicy meat. As for the steak and Guinness pie, the abiding memory is of the ample supply of thick, dark, tasty gravy lurking under the crust. We scoffed the lot between us!

Day Five: Just time for a quick breakfast before our dash to the airport. Dave had one of the excellent breakfast rolls. We’d been told that the kitchen were able to cook off-menu items as long as they were in supply, so Kay went for a bespoke breakfast of two fried eggs, bacon and toast, which the kitchen duly provided to order. Can’t say fairer than that!

We booked this visit partly on the strength of the Christmas dinner advertised on Molly’s website. The description sounded marvellous, so we were looking forward to it.

Sadly, it didn’t live up to expectations. For one thing, we were assigned a table in the gallery above the bar, surrounded by the clutter of tables being prepared for the evening’s sitting – preparations which were going on as we ate, which didn’t make for a very pleasant atmosphere to eat in. The distance from the kitchen also meant that food had longer to travel before it reached us, which of course meant that it wasn’t as hot as it should have been.

The soup was, predictably, tepid when it arrived, and rather on the bland side. As for the main course – well, the portion was big. But it was very much a case of quantity over quality: the roast potatoes were leathery; the mash was lumpy, as was the gravy; the sprouts were overdone; and everything was over-salty. The dessert was the best part of the meal, but not exactly Christmassy – a white and dark chocolate assembly. All very disappointing, considering that we’d largely planned our journey around the expectation of a lovely meal. (We subsequently spoke to someone who’d had the Christmas dinner on a previous occasion, and they confirmed they’d also been very disappointed.)

Other meals were OK, but not up to the past high standards – the steak and Guinness pie didn’t have the tasty gravy we remembered, and the bespoke breakfast in particular seemed to be a lot more trouble than it had been in the past.

Overall rating: 2½ out of 5 (1 out of 5 for the Christmas dinner)
We used to rate the food at Molly’s very highly for its consistent good quality, so it was a real disappointment to find that standards had slipped.