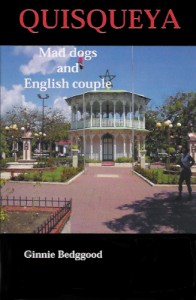 It’s perhaps inevitable that when you think about books by Britons about their own experiences in settling abroad, they tend to be about Europe – books like A Year In Provence or Driving Over Lemons, or even It’s All Greek To Me. Excellent though these books are, it makes a refreshing change when you get the chance to read a book penned by someone who’s decided to be a little more intrepid.

Ginnie Bedggood and her lively, forthright style are no strangers to this website; she’s singlehandedly responsible for our Dominican Republic section. She brings the same style to Quisqueya, the story of how she and her partner Grahame decided to settle in Puerto Plata on the DR’s northern coast in 1992, and the following eight years living in rented accommodation until they built and moved into their own home in December 2000. (The word Quisqueya itself is the original Taino Indian name – literally, “Mother of the Earth” – given to the land now known as the Dominican Republic.)

It would be very easy to write the book from the narrow point of view of a Briton abroad and to dismiss the differences of life in the DR as shortcomings or oddities on the part of the Dominicans. Ginnie steers well clear of this trap and, indeed, gently chides the naivety of some of the many foreigners who’ve visited Puerto Plata with a view to settling.

This is not to say that she glosses over the hard facts of DR life; anything but that. Indeed, she relates the many ups and downs of her eight years with relish and with a great deal of humorous self-deprecation. The book’s rich in anecdotes about the ins and outs of daily domestic life – by no means a straightforward routine – as well as the efforts of Ginnie and Grahame to find jobs and keep them. In the process Ginnie comes up with several shrewd observations about what makes DR society tick – the government, the economy, utilities, shopping, work – and how the Dominicans deal with the influx of foreigners, both tourists and more permanent settlers. Anyone who’s lived in a developing country for any length of time will, I think, see a lot of parallels with their own situation. And to add a bit of light relief, there’s the continuous presence in the background of Ginnie and Grahame’s beloved dogs.

The point Ginnie makes time and again is that neither culture is necessarily “wrong”; they’re just different, and the sooner the would-be immigrant grasps that fact and accepts it, the sooner he or she is likely to truly settle in. Anyone dreaming of moving to a developing country on the basis of a couple of weeks’ holiday in the sun would be well-advised to read this book, then take a good hard look at their own plans and check whether they really hold water.