402 Lebuh Chulia
Georgetown
Penang
It was late in the evening, and we were getting hungry. We needed to eat and fancied Italian for a change, but there weren’t any Italian places just around the corner in the pedestrianised north end of Jalan Penang. A bit of research on the Internet turned up Ecco in Lebuh Chulia. Lebuh Chulia is a long street, but we hoped we might be lucky and find it at the end closer to the Bayview Hotel, where we were staying.

We almost walked past it! We saw a backpacker coffee shop-type of place – one of the converted shophouses catering to the itinerant student crowd, with basic furnishings and decor. So we decided we might as well go there rather than traipsing for hours down Chulia. A quick glance at the menu revealed that we had in fact arrived where we’d intended to come in the first place. 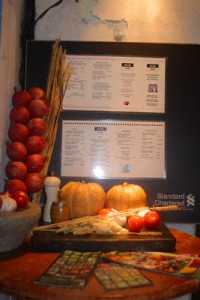 (We later discovered a sign on the chick-blind between the gallery and the street, and a menu display which we’d have seen if we’d been walking along Chulia in the other direction. But there was no kind of signage visible from the direction we were walking in…)

We sat down and looked at the menu. It was short, but laid emphasis on natural, freshly-prepared ingredients and hand-made pasta and pizza dough. This sounded encouraging. After a friendly chat with the waiter, we suddenly realised that time was marching on and it was only 25 minutes until their closing time! So we ordered, and prepared ourselves for a wait – which in the end wasn’t very long at all.

Bread and salad arrived first. The focaccia was delicious, with a thick spreading of pesto (rather than a dip as such). The mixed garden salad was appetisingly presented, with a lovely herby olive oil dressing. This was encouraging!

The pasta and pizza arrived shortly afterwards. The pasta Salvatore wasn’t exactly what we expected (spaghetti, according to the menu); it turned out to be much more like tagliatelle, but with strands of a similar length to the longest spaghetti you can think of! Kay, not being a big fan of salami in pasta, picked out the bits from hers; but the pasta wasn’t overloaded with them anyway – there was just enough of it to give a flavour without dominating, and plenty of evidence of the mushrooms, olives and basil tomato sauce, with just a hint of spice from the red chili flakes; excellent! Our pizza fungi (sic) with an additional topping of capsicum was deliciously thin and crispy. The topping was juicy and fresh, with plenty of cheese, but not overwhelmingly so.

At the end of the meal we were lucky enough to have the chance of a quick chat with the chef/owner, Law Soo Hock. You’d never think it, but he’s had no formal training as a chef, has never been to Italy, and has only been cooking for four years! But he’s passionate about fresh, home-prepared ingredients, and it’s clear he loves what he does – both from talking to him and from eating his food.

Overall rating: 4½ out of 5
This was as good a pizza ‘n’ pasta meal as we’ve had for a long time, and excellent value too. If you love Italian food, this is a great place to come. The only thing we’d like to see is some cream-based pasta sauces – maybe next time?