We’ve been convinced for several years that the Daily Telegraph has been diluting its serious content with more and more frivolous content to boost sales. (One of the signs of this happening was that Private Eye stopped calling it the “Torygraph” and – reflecting the frequency with which photographs of a certain British actress in varying states of undress seemed to appear in prominent positions – started calling it the “Hurleygraph” instead.)

The tactic may have worked. But it’s led to a situation where the “Most read stories” list on the Telegraph website looks like this (here’s a screenshot taken at 1000 GMT today): 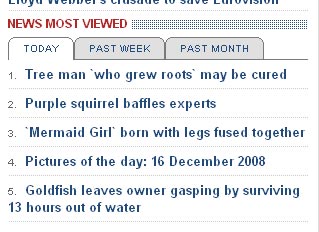 OK, so perhaps we can be charitable and accept that the Pictures of the Day for 16 December were particularly weighty news (though somehow we doubt it). But the rest of the Top 5 list looks like a collection worthy of the kind of freak show that people in the late nineteenth century would pay good money to go and see.