We paid an overnight visit to North Devon in August 2005. Here’s our review of the place where we stayed…

We chose this hotel because its website boasted of its “superb” carvery and extensive menu of home-made meals. The boast was an empty one as we weren’t impressed. It was one of these places where complacency reigns because “everyone else has liked it and no one has ever complained before”. Thus the fact that the undiscerning had happily scoffed their mediocre offerings led the management to believe they were providing something good. 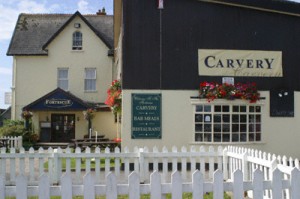 To be fair, the accommodation, whilst cramped, was OK for the price – despite the tired rags which served as towels. More up-market places in the area charge… a heck of a lot more. The room was very small but it was clean, so for the money we have no problems on that score.

The food, though, left a lot to be desired. Much of the disappointment was created by the great build-up they gave themselves. We thought we were in for a treat. Not so. Dave had the steak, mushroom and ale pie and it met expectations. The flavour and the quality of meat was excellent. It was very nice indeed.

Kay made the mistake of ordering their fisherman’s pie. At £8.50 she expected it would be good. It was actually one of the worst fish pies she’s ever had. The sauce was nasty. There’s no other adjective to describe it. It was watery and the sauce had “split” resulting in a kind of grainy texture. Apart from the sauce, the filling of the pie appeared to contain offcuts of fish like chunks of brown bits that most people would throw away. Too much salmon (a touch of pseudo luxury?) gave it an over-rich flavour although the pieces were so tiny that again you could only think they’d used offcuts, and nasty little bits of rubbery processed prawns.

A decent fish pie, in our view, should contain cod or haddock, or possibly hake or some other white fish and maybe a bit of smoked fish. This pie didn’t pass muster at all. And the burnt potato on top didn’t help matters.

Isn’t it funny? When people ask: “How was the meal?” they only ask in full expectation of a reply saying how lovely it was. When you tell them the truth, or suggest how it could be better, they get all defensive and say how no-one else has ever said anything.

Since we’d booked bed and breakfast, Kay decided to take the camera down to the dining room the following morning for breakfast. We hoped that it would be good and that the vile fish pie had been a one-off, but again it was a disappointment. Apart from the dreadful service – we had to ask for almost everything individually: “Toast please? Butter?” – the meal itself was stingy as well as being comprised of low-quality food.

The beans were OK.

And there was toast (eventually, after a few reminders to the waiting staff). The toast… was not.

All in all, it was a friendly place and clean, we just wouldn’t recommend eating there. 1/5