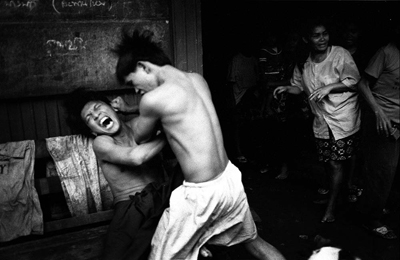 “Thailand’s spiralling drug problems were supposedly going to be eradicated by the Thaksin government’s ‘War On Drugs’ campaign. In actuality this gave the police free licence to commit extrajudicial killings of anyone suspected of dealing in narcotics. The campaign’s official death toll was 2,500, including an eight-year-old boy, but many human right groups dispute this number, making it much higher. Ya ba translates into English as ‘mad medicine’.”
[Editor’s note: Ya ba is the Thai name for tablets containing a mixture of methamphetamine (“meth” or “speed”) and caffeine.]