The weekend, warts and all…

If you want to get from A to B quickly, don’t go on the world’s oldest working steam locomotive, the Fairy Queen. Part of the charm of such a trip is its unpredictability. And the “old lady”, as she’s affectionately known by some, certainly is charming.

The Fairy Queen resumed commercial service in 1997 after almost 90 years of “retirement”. We went on the first trip of 2001 on 24 November.

We left Delhi’s Cantonment Station on Saturday morning amidst a flurry of media attention. The train chugged out with much cheering and whistling and we were off on our adventure!

The seating is comfortable, with observation lounges at the front and rear of the carriages in addition to the usual forward-looking pairs of seats. The toilets were spotlessly clean. The staff are efficient and courteous and were soon serving our “light snack”. This consisted of tea, coffee, anaemic-looking cheese sandwiches, crisps, and the ubiquitous ketchup.

Although we had booked as part of a group of four people, we were delighted to find another party of ten people on board with whom we were already vaguely acquainted. By the end of the trip, we felt we had made ten new friends. I’d recommend going in a group rather than as a single or couple but don’t worry if you can’t because you’re sure to make new friends on board. 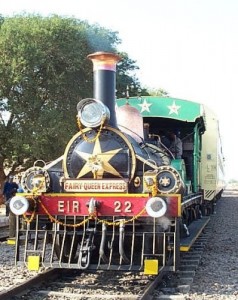 The train makes frequent watering stops, necessary for producing the steam. The five stops, at ten minutes each, provide ample opportunity for smokers, photographers, and those who enjoy meeting the locals to do their own thing. Naturally, a sight such as the Fairy Queen attracts an audience and a few school parties had turned out at the watering stations to see us.

It was all very good-humoured and we were given VIP treatment. At one stage one of our party was surrounded by enthusiastic autograph seekers. It all added to the fun.

Back on board, lunch was served. As is usual in India, the choice was veg or non-veg. Although neither of us are vegetarians, we ordered one of each just to keep our options open. But there appeared to be no difference between the two other than that the veg was served minus the chicken curry. Overall, the meal was unexciting (if it had been served in a restaurant we wouldn’t have gone back there) but it was well presented and it filled a hole.

Some of us had the additional pleasure of riding on the footplate and everyone who did so, including me, declared that it was one of the highlights of the weekend. Highly recommended if you get the chance. Throughout the whole trip, the staff were eager to please and even set up a “run by” along one of the platforms, where we had even more chances to capture the Fairy Queen on film.

The Fairy Queen encountered a few technical problems, mainly caused by poor quality fuel. Those in the know said that it was lignite rather than coal and therefore the excess of ash caused the pressure to drop. Even that was a bit too technical for me so don’t expect any more details about that.

We arrived at Alwar station in high spirits only to be crammed into a bus that was too small for the number of passengers. The discomfort could have been lessened if the driver had thought to let us stow the luggage elsewhere. Given the complaints about the outward journey, he was keen to let us put the bags in “the backside” on our return to Alwar. I was at the back of the bus, where there was no lighting, sitting on half a seat with three bags on top of me, and have to say that it spoiled my enjoyment. I believe that this problem has been addressed now so if you go, you probably won’t have to put up with that.

Next, we arrived at the Sariska Palace. And it just didn’t live up to expectations. The other group had not been informed that the prices are based on two people sharing a room, and were disconcerted to find that they were being forced to sleep with their colleagues. When the room fiasco was eventually sorted, we all went off to check out our rooms, and returned to the bar to report back. Meanwhile, there was a cultural dance event going on outside but many of us opted to stay inside because of the cold weather. 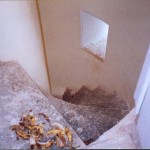 One guy was so long coming back from his room that he figured he needed a jeep to take him there. Another reported that when he finally managed to scale the stairs (dimly lit, and steep – two-foot risers) he found the top one garnished with banana skins and what he could only presume were monkey droppings. (If you’re really bizarre enough to want to see the banana skins, click on the thumbnail…) I reported back to the group that our room was “large” because I couldn’t think of anything more positive to say about it. Another person, applying all the diplomacy he could muster, described his as “minimalist”, and a third summed it up in one word. “Crap.”

Opinions of the hotel itself were no higher. Basically, it was a lack of attention to detail and the problems could be easily fixed. New towels to replace the tired grey rags would help, as would new carpets or even just dhurries. There were no amenities in the rooms such as a fridge or TV. OK for one night but not good for a longer stay. As expected, drinks prices were very high (bring your own but you need a cool box). The food was edible, but only just, the staff poorly trained – they kept trying to whip away plates before we’d finished eating. Their attempts at making drinks such as gin and tonic and Bloody Mary produced bizarre results. And the hot water in the rooms was erratic. Some people ended up having cold or tepid showers; personally I was one of the lucky ones who didn’t suffer. And no, it wasn’t because I used up all the hot water. It seemed that those who tried before 5.45 am were the losers, and the sleepy-heads gained. Never mind, it was off to the dining room next for an unlimited supply of tea or coffee.

The reason we were all up so early was because we were off to hunt tigers! We’d had the common sense to anticipate that it would be cold there but had not realised that we’d be in open-top jeeps. Thus anyone contemplating this trip should know that clothes suitable for British winter weather are required for comfort on the safari. A jacket isn’t enough, I’d recommend a hat and gloves too.

Apart from the discomfort of the cold, I confess that I didn’t enjoy the safari in an open jeep. Given that tigers are wild animals, and unpredictable, I could never feel sure that one wouldn’t pounce on us from a tree. (Of course, all the guys were too macho to acknowledge the risk at the time, but a few nights later in the Club there seemed to be more agreement on this score. Maybe it was a case of: “We survived, so now we get the kudos”. ) And the fact that our jeep stalled on hills and the driver seemed to be practising for an off-road rally did little to allay my fears. I survived the trip by making Dave sit behind me. After all, tigers usually attack from the rear and he was wearing a green jacket. I hoped that any potential predator would perceive him as a large vegetable.

Well, we drove around the Sariska tiger sanctuary for a few hours and saw plenty of deer, antelope, monkeys, and a large variety of birds, but no tiger. The sanctuary has 26 tigers and we saw what our driver informed us were their “fingerprints”. Anyone who has been to the Masai Mara or other large game parks in Africa will find this relatively lacking in action. However, it would have been a pleasant trip out if we’d been warmer. Most enjoyed it.

We returned to the hotel to defrost and eat breakfast, before departing for Alwar and the trip home. As I’ve said, the return bus journey was better as our luggage was stowed in the boot, and there was plenty of interesting scenery. As well as camels, which are a common sight in Rajasthan, we also saw a couple of elephants plodding down the road. Driving through this rural area, we had a good chance to see the various agricultural technologies in use. As well as working animals, shiny new tractors were plentiful, and crops were abundant in the irrigated fields.

It was good to get back on board the “old lady” – after all, that was the main point of the trip. And the return journey was every bit as good as the outward. Lunch was different from the previous day, which was a nice touch, and everyone chilled out as the temperature rose.

All in all, it was a great weekend, but it’s best to know beforehand what to expect. A journey on the Fairy Queen is an experience not to be missed. Try it!

The cost of the package, including everything except alcoholic drinks, is Rs 10,000 per person based on two people sharing a room. Rs 5,000 for children between 5 and 12 years. You can buy direct from www.indianrail.gov.in (although I couldn’t find the Fairy Queen mentioned on their website) or check out the Internet for travel agents selling this trip.