Eastern & Oriental Hotel
10 Lebuh Farquhar
10200 Penang
Just as a visit to Singapore is not complete without a Singapore Sling in Raffles, we felt that we must have a sling or a punch at the E&O. Expecting it to be prohibitively expensive, we planned only to stay for one drink before moving on to somewhere more affordable. Surprisingly, we discovered that because of Happy Hour (which lasts from 5pm till closing!) the bar at the E&O was considerably cheaper than the so-called British bar called Soho, which we’d visited the previous evening.

The à la carte menu for the main restaurant in the E&O is relatively expensive, although it looks like a great place to go for a special treat. The pub grub menu in Farquhar’s is different, though. There’s a reasonable variety of food on offer at affordable prices. 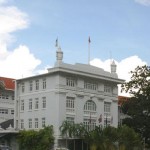 The bar has a pleasant ambience, and you can sit looking out at the sea. We decided to stay on for a beer or two and ordered half a dozen sticks of chicken satay just to keep us going until dinner time. This was beautifully presented and tasted delicious.

When dinner time came we were comfortable where we were and didn’t feel like moving on so we ordered fish ‘n’ chips (RM24) from the pub grub menu. Again the food was very nice, and something we’d probably have again.

(I would’ve rated it 4/5 but for the fact that doing so would be unfair to restaurants elsewhere which will be rated 4/5. Great but not quite perfect.)

It’s probably the best you can find in George Town and the ambience is lovely. Farquhar’s Bar is an oasis in George Town, which otherwise does not seem to have much to offer those looking for decent food and drink at a reasonable price. However, if it had been in a more vibrant city, it would probably not have been worth a second look.