We often go for a hotel buffet if we’re getting hungry and can’t decide between ourselves what we fancy to eat; at least that way we stand a fair chance of getting something we like, and neither of us is constrained by the other’s preferences or dislikes. So one lunchtime we took the easy option and nipped into our own hotel’s lunchtime buffet in the Planter’s Inn bar/café to see what they had to offer. A preliminary scout around looked promising: salads, tempura, teppanyaki, sushi and sashimi, pasta, Malay food, cheeses, soups and desserts, all well presented. We decided to go for it, and were shown to a table for two in the restaurant’s smoking section (yes, they still exist in Malaysia) with a great view of the Petronas Towers. A cheerful and chatty waiter took our order for two Tiger beers, which appeared promptly.

Here’s a quick run-down of the various stations we visited, whether we ate from them or not: 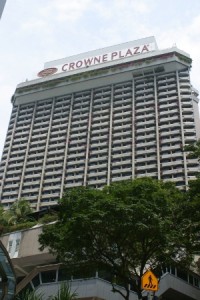 Overall rating: 3½ out of 5
We wouldn’t race back here as a special treat by any means, but we certainly weren’t disappointed either – it was a reasonable offering for a hotel buffet. Be warned, though; at about RM50 for two small Tigers, the beer is very expensive!