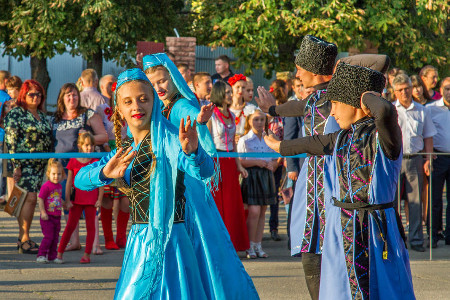 A children’s artistic collective performs dances for Ukraine’s Independence Day in the town of Polohy (Russian: Pologi) in the province of Zaporizhzhya (Russian: Zaporozhye) in south-eastern Ukraine.

Ukraine celebrates its Independence Day on 24 August, the day in 1991 when the Supreme Rada of the Ukrainian Soviet Socialist Republic voted overwhelmingly for independence, to be confirmed by a referendum held on 1 December that year. Over 90 per cent of votes cast were in favour of independence, with a turnout of 82 per cent. The first three countries to recognise Ukraine’s independence, on 2 December, were neighbours Poland and Russia and Canada, home of a large Ukrainian diaspora.

Zaporizhzhya province is divided roughly half-and-half between Ukrainian and Russian speakers – the city itself (which was twinned with Birmingham in 1973) has a majority of Russian speakers, but in the countryside Ukrainian predominates. It’s something of a Cossack heartland; the Zaporizhian Sich was one of two semi-autonomous regions in the sixteenth to eighteenth centuries, alongside the Don Cossack Host to the east.

These children are wearing Cossack costumes. Many Ukrainians choose to wear a vyshyvanka, a shirt which is embroidered according to the local style where it’s made. The embroidery tells a story and also acts as a talisman to protect the wearer.