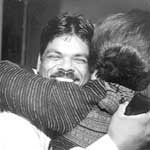 What is modern slavery?

For many people, the image that comes to mind when they hear the word slavery is that of the old slave trade. We think of the buying and selling of people, their shipment from one continent to another and the abolition of the trade in the early 1800s. Even if we know nothing about the slave trade, it is something we think of as part of our history rather than our present. But the reality is that slavery continues today.

Millions of men, women and children around the world are forced to lead lives as slaves. Although this exploitation is often not called slavery, the conditions are the same. People are sold like objects, forced to work for little or no pay and are at the mercy of their “employers”.

Slavery exists today despite the fact that it is banned in most of the countries where it is practised. It is also prohibited by the 1948 Universal Declaration of Human Rights and the 1956 UN Supplementary Convention on the Abolition of Slavery, the Slave Trade and Institutions and Practices Similar to Slavery. Women from eastern Europe are bonded into prostitution, children are trafficked between West African countries and men are forced to work as slaves on Brazilian agricultural estates. Contemporary slavery takes various forms and affects people of all ages, sex and race.

What types of slavery exist today?

Bonded labour affects at least 20 million people around the world. People become bonded labourers by taking or being tricked into taking a loan for as little as the cost of medicine for a sick child. To repay the debt, they are forced to work long hours, seven days a week, 365 days a year. They receive basic food and shelter as “payment” for their work, but may never pay off the loan, which can be passed down through several generations.

Forced labour affects people who are illegally recruited by governments, political parties or private individuals, and forced to work – usually under threat of violence or other penalties. Worst forms of child labour refers to children who work in exploitative or dangerous conditions. Tens of millions of children around the world work full-time, depriving them of the education and recreation crucial to their personal and social development.

Commercial sexual exploitation of children. Children are exploited for their commercial value through prostitution, trafficking and pornography. They are often kidnapped, bought, or forced to enter the sex market. Trafficking involves the transport and/or trade of humans, usually women or children, for economic gain using force or deception. Often migrant women are tricked and forced into domestic work or prostitution.

Early and forced marriage affects women and girls who are married without choice and are forced into lives of servitude often accompanied by physical violence. Traditional or “chattel” slavery involves the buying and selling of people. They are often abducted from their homes, inherited or given as gifts.

Editor’s note: The text above was adapted from an article on Anti-Slavery International’s website. They allow their materials to be used for non-commercial purposes. The materials are used here only for the purpose of promoting the anti-slavery.org website.

To find out more about this subject, or to join the campaign against slavery, please visit www.antislavery.org