Why would anyone want to be a dentist? I can’t think of anything worse than poking around at someone’s grotty teeth. (Well, it’s probably better than being a colonic irrigator. Eek!) Even the noise of the drills would set my teeth on edge – pardon the pun. No one wants to go to the dentist. Many put it off until they absolutely have to go, and most just see it as a necessary evil. How would you like to do a job where none of your customers/clients wanted to be with you? On the other hand, if you like drills, giving people big jabs, and turning people’s faces into footballs, then this really could be for you.

You’ll never guess what. I went to the dentist today. After an adventurous holiday in the French Alps, I did not return with any wrecked limbs, but instead managed to break a tooth. I don’t really mind going to the dentist as I’m lucky to have a great one. His name’s Mr Byte, and he’s a keen surfer who knows the address of this site so I’d better be careful. I’ll have to see him again in six months.

He always does an expert job, he’s gentle, and has good conversation, although it’s sometimes hard to reply to his questions with a ton of metal in my mouth. My only complaint is that they’ve now started using rinse-out stuff of a very peculiar colour. It looks like urine and I could hardly bear to put it in my mouth. I found a way round that, though – I pretend it’s whisky. But that led to the difficulty of making me spit it out. 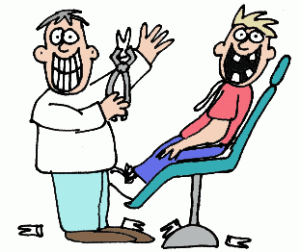 Mr Byte, whilst giving me my smile back, sometimes does rather odd things. Like when I needed a couple of porcelain veneers at the front, among other unpleasant things, he coated the offending teeth with bright yellow wax-like stuff. He assured me it would wear off after a couple of days but it’s kind of hard to interact with other people if you are trying to hide something like that. No wonder I like the Internet.

Anyway, it all worked out well in the end. Sometimes, when on the couch I lie, I think of etiquette and wonder what is correct. Maybe I’ve missed out somewhere but I’m not sure quite how to behave. You can’t really watch to see what other people do so you can learn. I know not to bite, and to say “Thank you” at the end. But it’s the little things that elude me. It never occurred to me to close my eyes, for example, until I read somewhere that it is disconcerting for a dentist if your beady eyes are watching him/her staring up your left nostril. Now I always make sure that my left nostril is clean and shut my eyes.

I still worry that the guy will think I’m some kind of idiot. He wouldn’t be far wrong. On the last visit, I was lying there with my eyes tightly shut, he said “Open please,” so I opened my eyes… Anyway, this time it was like being a kid again as I got a little prize for being good. It used to be sweeties (no wonder the Scots have a reputation for bad teeth) when I was young but Mr Byte gave me the casts he had made of my teeth. (They look like a bizarre set of false teeth.) He suggested it could be an unusual paperweight. I don’t know about that, but I’ve had loads of fun with them already.

Ah well, that’s probably enough to fill this week’s column and to crown it all, the visit wasn’t entirely painless. “Just go to reception for your bill, please.” Ouch! Now that does hurt.