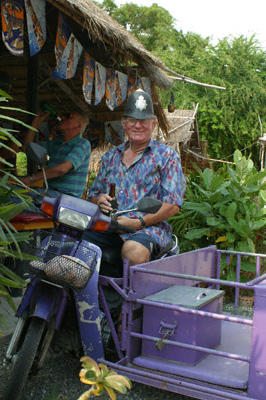 “I took this photo of our German pal Walter the other day, at our favourite beer shack. He’s quite a local sight, riding round on his purple LoveMobile and wearing his bobby’s hat instead of a proper crash-helmet!

“We went round a couple of days later and the bar had been abandoned. A bit of a shock as it wasn’t due for demolition for another month yet. (Rumour has it they’re going to build a casino on the site.)”

One Response to “Not the local police…”