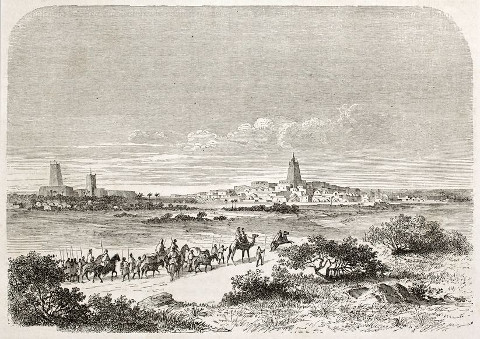 An engraving of a camel caravan arriving before the desert city of Timbuktu. Published in the Paris-based weekly journal Le Tour du Monde in 1860.

Despite its mythical status, Timbuktu’s very much a real city. It was founded in the 12th century by Tuareg tribes as a trading post and soon became one of the great Muslim seats of learning. It also became a very wealthy city, based on the trade in gold, slaves, ivory and salt.

The myth is largely accounted for by Timbuktu’s inaccessibility. The first European didn’t visit until 1826. In those days a journey to Timbuktu involved a two-month camel trek and often resulted in the death of the intrepid – or foolhardy – traveller in question.