We spent four nights in Siem Reap in April 2006, partly with the intention of visiting Angkor Wat. After all, when you’re living within shouting distance of one of the great wonders of the world, it’d be a shame not to, wouldn’t it?

So, on our second evening in town, we finally got ourselves organised to go and visit this famous UNESCO World Heritage Site. Actually, I tell a lie there. We didn’t get ourselves organised at all. A new friend of ours, Diarmuid, was on a two-year voyage round the world – he’d been a bank manager but was taking time out – and had already been to Angkor. He fixed us up with a tuk-tuk (also known as a remorque-moto; unlike the Thai version of a tuk-tuk, this is simply a motorbike with a two-person canopied trailer) for the following day; from ten in the morning until five in the evening for just $10. Amazingly, we were up and ready to go only a few minutes after ten o’clock and set off shortly afterwards. 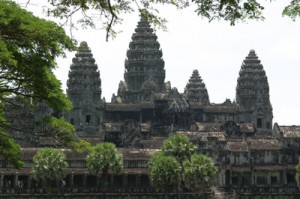 The entrance to the complex is controlled by a big tollbooth of the sort you get on motorway toll roads, bridges and tunnels in the UK. It costs $20 for a day pass, although you can save money by getting a three-day or week photo pass if you’re keen to explore the whole place in depth. And with dozens of different buildings to look at, you could easily spend that long there if temples are your thing. . . 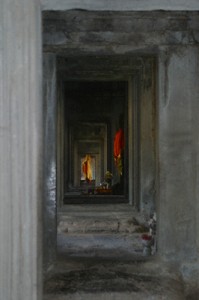 Angkor Wat is reportedly the largest religious building in the world. It is seriously big. That said, we found it less interesting than we’d expected – possibly because we’d not really read up properly on it beforehand and didn’t really appreciate the scale, and the detail, of the whole thing. Mind you, neither of us was feeling that great – too much of a good time the previous evening – which probably diminished our enjoyment a bit anyway. Certainly we were glad of the chance to buy a couple of bottles of cold water at the row of stalls to the left of the temple.

Sunset’s supposed to be the best time to see Angkor Wat; it’s unusual for Hindu temples in that it faces west, which is traditionally the direction of death. We weren’t going to wait that long to see it then. Maybe next time we’re in Siem Reap. . . 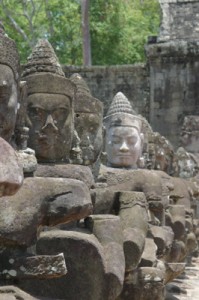 Our driver next took us further north to Angkor Thom. Considering that it looked as if it was just next to Angkor Wat on the map, it seemed to take a surprisingly long time to get there. But there was no question of him having taken us the long way round. We started to appreciate just how big the Angkor complex really is!

After about ten minutes we came to the South Gate of Angkor Thom. It’s an impressive sight! The gate itself is approached by a bridge over a moat, with a row of stone demons on each side, each row holding onto a seven-headed serpent which also faces forward to confront the person approaching. Kay naturally insisted we stop and go back through the gate so that she could photograph the guardians of the gate at leisure. 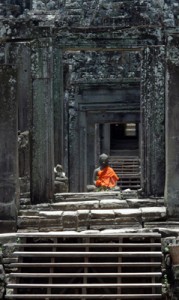 The Bayon Temple is the centrepiece of Angkor Thom. For us, it was what we’d come for when we came to Angkor, with lots of interest; faces, statues, and nooks and crannies all over the place. The north entrance was guarded by a brightly saffron-robed Buddha statue – and a Buddhist nun who pounced on anyone coming up or down the steps, to try to sell them a blessing. We dodged inside just as another party was coming out!

Upon leaving the temple we found ourselves accosted by a whole posse of stallholders offering green coconuts to drink and pineapples to eat. We resisted their blandishments and made our way up the hill to the nearby Baphuon Temple, only to find that the road was off-limits and the temple undergoing renovation. Judging by the vast numbers of catalogued stones we saw, it must have been undergoing full-scale reconstruction.

Although there were several shacks set up as restaurants close by the temple, we opted to return to Molly Malone’s for lunch. Then, of course, inertia set in and we did no more sightseeing that day – not even Ta Prohm temple, the one which featured so vividly in Tomb Raider. Ah well, there’s always next time!