Maluk has the look, feel and smell of a village hastily morphed into a town. Take the cars and motorcycles out of the picture and Maluk could pass for Dodge City in the US West circa 1880. I slow down behind several horse-drawn carts carrying jilbab-covered ladies clutching bunches of greens and a few live roosters. Maluk boasts a dentist, several doctors, a public health clinic, telephones, electricity, and a public water system. The main road is lined with a variety of small shops selling the usual Indonesian foods, household supplies and building materials. Maluk also hosts the Kiwi Bar, a bar and restaurant with a somewhat naughty reputation, as well as Hotel Trophy which is owned by an Australian and his Indonesian wife. 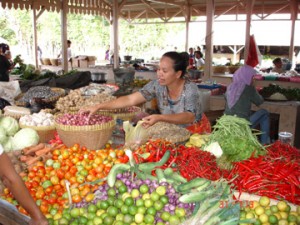 Residents of the local villages, including my own village of Sekongkang Bawah, do the majority of their shopping in Maluk. Goods here tend to be somewhat higher priced than in the more populated areas of Indonesia because of the transportation factor. I guide my Honda up to the Dunia Baru store which sells a variety of things including fishing gear, sporting goods, and stationery. I grab a cold bottle of Coca-Cola from the glass-faced refrigerator, ask the shop girl to open it, and take a long drink to wash the dust out of my mouth. Pak Haji, the owner, pulls up in front in his Kijang, and shakes my hand.

“Where’s your wife?” he asks looking around his shop. He’s dressed in his usual rumpled T-shirt and baggy knee-length shorts.

I wonder where this conversation will go as local businessmen generally try to sell me things when I’m out on my own without my wife to put a damper on their energetic capitalist impulse. “She’s at home. I just came back from Sumbawa Besar. I needed to buy some circuit breakers.” Ah, put everything out there all at once. This is my ploy to end the conversation early so that I can go home and see the family and have lunch.

“What kind of circuit breakers?” he quizzes me while looking over my shoulder at my bulging backpack. Obviously the conversation is going to last longer than I had hoped.

I decline to pull the breakers out of my backpack still hoping to get out the door quickly. “25 amps.”

He shakes his balding head with a look of regret. “I could have sold you some. You wouldn’t have had to go so far.”

“Oh, you have some?” I reply with genuine interest. This could save me some time in the future.

“No, but I could have ordered some from Lombok. They have better quality ones.” He’s waiting for me to order some at what I’m sure will be a significantly higher cost than what I paid in Sumbawa Besar.

“Oh well, maybe next time. I have to run now. I have a meeting at school soon.” I give his large hand a tight grip, break it off quickly and head off for home.

The village of Sekongkang is actually two small villages separated by a narrow, concrete bridge: Sekongkang Atas (Upper Sekongkang) and Sekongkang Bawah (Lower Sekongkang). Both are situated about 15 minutes from Maluk over a high hill laced with a narrow, curving road that I enjoy riding on with my motorbike, but dread driving on in my car. The two Sekongkangs have perhaps several thousand residents between them along with a new public health clinic, a doctor, a few shops, a few mosques, a few elementary schools and a junior high, and a new government office, the Kantor Camat. The Sekongkangs are the site of a frenzy of construction. It seems that everyone connected with the Newmont mine is building a new home or renovating their old one. The local government has hopes of developing a tourist industry based on the wild beauty of the white sand beaches and traditional Sumbawanese culture. And while some tourists come for the surfing, a clear plan to develop the other enticements of the area has yet to be developed.

Most of the folks here are farmers or casual labourers. The mine also provides employment for some of the local citizens. A few work at one of the two local hotels: Yoyo’s or Tropical. Yoyo’s, named after the famous surfing spot in this area, and Tropical just down the road, mostly provide service for the expatriate population from Newmont. Occasionally they attract a few of the more well heeled surfers, but generally their prices keep the hard-core surfers looking for cheaper accommodations up north in Maluk or Jelenga.

This corner of Sumbawa is home to migrants from a variety of islands drawn here in the search for employment with the mine. My neighbours come from Flores, Sumba, Timor, Lombok, and Java; yet everyone gets along famously. Like small communities around the world, Sekongkang Bawah is a place where everyone’s business is public knowledge.

I pull up to the gate of our house and beep my horn. My neighbour, originally from Jereweh, comes over while I’m waiting for someone to come and unlock the gate. “Where have you been?” he shouts.

Paul Theroux says in The Happy Isles of Oceania: “Travel, which is nearly always seen as an attempt to escape from the ego, is in my opinion the opposite. Nothing induces concentration or inspires memory like an alien landscape or a foreign culture. It is simply not possible (as romantics think) to lose yourself in an exotic place. Much more likely is an experience of intense nostalgia, a harking back to an earlier stage in your life, or seeing clearly a serious mistake. But this does not happen to the exclusion of the exotic present. What makes the whole experience vivid, and sometimes thrilling, is the juxtaposition of the present and the past – London seen from the heights of Harris Saddle.”

Sumbawanese from this part of the island have a rough and tough manner somewhat like a displaced New York taxi driver. They are harmless, but nosier and more aggressive than the Balinese or Javanese. “Just back from Sumbawa Besar for some electrical parts,” I reply in a muted, but strident tone. I pull out the three circuit breakers and he smiles and nods.

“It’s hard buying things here, isn’t it? Can’t you get some from Newmont?”

I reply once again my set piece on not being an employee of the mining company, but rather the school that contracts with it for educating the expatriate children. Mining companies often have a somewhat problematic relationship with the local communities; Newmont has had its share of problems as well, but because of their proactive community development programme, they have a good reputation with the local citizens. I start to drift off into a mental accounting of Newmont’s many contributions to the community, but Lupe’s nodding brings me back to the present interaction.

Even while nodding, the vacant look he gives me signifies that he doesn’t really believe my explanation. While Indonesians are differentiated here based on the island of their birth, bules (white people) are lumped together. It’s distinctly different from Bali, the tourist haven, where Balinese are quite skilled in assigning foreigners concrete identities based on their nationality. In this remote area of Indonesia, bules have two identities: surfer or Newmont employee. Since I work “inside” as the locals call the mining community, I obviously fit into the second category. Identity politics in an archipelago of travellers and migrants. My eldest daughter, Mercedes, bounces out of the house and unlocks the gate. One more trip through Paradise.