For some reason – mostly, I guess, due to the distortions of perception common to those who live in small villages – I had the impression that Sumbawa Besar would be a wonderland of shops, restaurants, hotels and perhaps even a bookstore. The reality is that it’s the sleepy little capital city of a large, sleepy island. After an uneventful night at the Hotel Tambora with only one offer of a woman (“I’m married.” — “It doesn’t matter.” — “It does if you know my wife.”), and a breakfast of toast and bitter coffee, I’m ready to head back to my little village of Sekongkang. I’m looking forward to the ride as the sky is a cobalt blue and a soft breeze promises a pleasant journey on my trusty Honda.

Just outside of town I pass the Kencana Beach Bungalows which are owned by the same family that owns the Tambora in Sumbawa Besar. I take a quick peek, find the bungalows inviting and regret that I didn’t stay here rather than in town. But the thought of getting back to my family encourages me to push on.

Before I arrive at the harbour of Poto Tano, Bungin Island pops into view; it’s one of the curiosities of Indonesia. Bungin is known as the most densely populated place in the country. From the coast line, I stop and take a few photos of the island since I don’t want to take the trouble to hire a boat to reach the island. Bungin Island is actually a coral reef on which stilt houses are packed together cheek to jowl. The residents make a living by fishing. I was told by an Indonesian colleague that the people of the island intermarry and rarely leave. A people with the mental fortitude that enables them to accept such insularity and lack of privacy seem far beyond my meagre ability to understand.

I continue on and soon arrive at the turn off to the harbour at Poto Tano. Travel in an archipelago for people without the means to take an aeroplane requires moving from island to island via ferry. While far from luxury vessels, ferries in Indonesia serve their purpose in an unassuming, but fairly efficient manner. Ferries leave Poto Tano regularly for Lombok. The crossing takes about 90 minutes, and is one of the colourful aspects of travelling in the more remote parts of Indonesia. Families often bring packed lunches and drinks with them to consume on the journey, but for those who haven’t had the time or inclination to pack some snacks, there are plenty of hawkers selling fruits, boiled rice packages, drinks, chocolate bars, and cigarettes. Cars, trucks, buses and motorcycles compete for space in the bottom tier of the ferries. 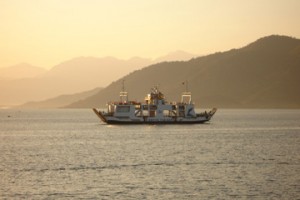 As I turn onto the highway that winds down the southwest coast, I think about stopping in Setaluk, a village just down the road where an Englishman who married a local lady lives, but I’ve forgotten his address so I slowly cruise past the market thinking that he might be there shopping with his wife and new child.  While I don’t see him, I become an object of interest for the locals who obviously don’t get many foreigners in their village. A group of teenagers gathered on the edge of the market wave and shout, “Hello, bule!” The attention that locals pay to foreigners in this part of Sumbawa doesn’t quite have the edge that foreigner/local interactions have in Bali. As tourism hasn’t developed here yet, locals lack an economic interest in their interactions with foreigners, and the resulting relations are generally ones of mutual curiosity.

As I drive on, I think about my first contact with a Balinese outside of the tourist areas back in 1989. I was on a bus travelling from Denpasar to Singaraja via Pupuan. It was my first trip outside Irian Jaya in the five months that I had been living in Indonesia. Dressed in my teacher’s uniform of a Polo shirt and pressed slacks and carrying a bulging, battered red cloth suitcase, I stuck out on the bus filled with Balinese returning home from the capital. The ancient bus groaned to a halt just outside of Pupuan and a tiny old grandmother seated next to me asked if I would like to share some of her meal of fried rice and chicken. We sat and chatted for an hour over our lunch while the driver repaired the bus. When we finally reached Pupuan, the grandmother got down and invited me to visit her house if I ever happened to be in the area again. After a week of being hustled in Kuta, this small interaction elevated my frame of mind and opened me up once again to my imagined reality of Bali.

By the time my daydreaming is finished, I realise that I have just passed the Pertamina station just north of Taliwang. I do a U-turn and head back. There’s a small queue at the pump, so I take my place. A government employee in a brown uniform is just in front of me on his Honda Karisma. He turns, adjusts his brown government-issued cap on a slightly greying thick crop of hair. “Do you speak Indonesian?” he asks somewhat shyly.

“Oh, a little bit,” I reply. My inquisitor introduces himself as Hassan and gives me a firm handshake, holding it somewhat longer than a Westerner would. It took me several years before I grew past being uncomfortable with the long Indonesian handshakes. One of the hardest Indonesian cultural traits to become accustomed to is the minimalist idea of personal space. Westerners generally have a large invisible space that they like to surround themselves with; Indonesians have almost none and think nothing of standing as close as possible to foreigners, as they are unaware of this very significant cultural difference.

“How do you like the Karisma?” Hassan says. I’m completely thrown by this very unusual opening to a conversation. I had already prepared my list of responses to the usual sequence of questions, but none of them included comments about my motorbike. Now I need to actually pay attention to the conversation. We chat for a few minutes about our bikes and then slide into the usual questions of where I’m from, what I do, married or not, children, etc. Hassan invites me to visit his house in Taliwang, but I tell him I’m late for a meeting with my contractor. I fill my bike with subsidised petrol for the ridiculous price of about 50p and head off for Jelenga where I want to stop for a beer and chat with Memed at the bungalows about how the tourist season has gone so far this year.

The road from Taliwang to Jereweh is smoothly paved, and I put the bike up to its comfortable limit of 100 for a short burst. It handles well and within 15 minutes I’m in Jereweh. Jereweh is a small, pretty town with well-ordered houses, several mosques, a number of shops and a high school. The cleanliness of the main road impresses me each time I pass through. Indonesians, unfortunately, have a propensity for throwing their rubbish anywhere outside of their immediate living environment even if it means throwing it in the vacant lot next door. For whatever reason, the citizens of Jereweh seem to have found a less public place to deposit their rubbish and that sense of civic awareness endears them to me. Just as I’m about to turn off on to the road to the beach, I see Memed driving down the road with a tourist. I decide that sitting alone with a beer is not worth an eight-kilometre bounce down the potholed road – so I drive on.

The road outside Jereweh climbs through a series of hills until you reach the high point which overlooks the village of Benete. This stretch of the road offers some of the finest of Sumbawan landscapes; a series of deep green hills and valleys reach far out into the distant horizon. Eagles circle in the clear blue sky looking for a meal. I stop at one of the clear points on the road where I can take a few photographs. Shooting the vistas and smoking a cigarette, I imagine a time when a relative of the recently discovered Flores Man (actually a lady) might have wandered these hills 18,000 years ago looking for the tiny elephants that roamed the area, or foraging for fruits and roots. The jungle at the edge of the horizon is still free from the development occurring just to the south and the north. This unspoiled space is an interlude of the primitive in the developing composition of modernity being written on southwest Sumbawa.

I descend into Benete which is an overgrown village alongside the portside facilities of PT. Newmont, the American mining company digging gold and copper out of the surrounding hills. Many of the Indonesian employees of Newmont live here within easy access of their place of employment. A few shops, schools, and mosques line the main road. A string of schoolchildren walking home from school shout and wave. I give a quick wave and smile. Just south of Benete, I climb another hill and descend into the village of Maluk, the main centre of activity in southwest Sumbawa.