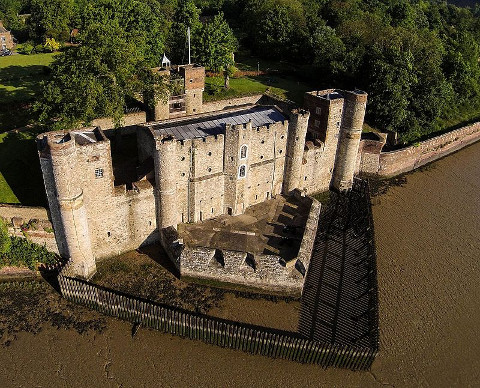 Upnor Castle on the Medway estuary in Kent.

Despite the name, Upnor is really more a fort than a castle. It was built on the orders of Elizabeth I between 1559 and 1567 at the beginning of her reign, a time of tension with European powers. Its purpose was to protect the dockyard at Chatham – which in 1550 had been designated the English navy’s primary harbour for all ships other than those based at Portsmouth. As you can see from the photo, the fortifications all face the river.

In spite of its status, Chatham’s outer defences were neglected over the years. Upnor Castle and a chain across the Medway at Gillingham (itself undefended) were all that stood between the dockyard and an enemy fleet. Work started on an additional fort at Sheerness in 1665, but during the Second Anglo-Dutch War the incomplete fort was itself captured and used by the Dutch as a base for a successful raid on Chatham in June 1667. In this action, regarded as one of the most humiliating in the Royal Navy’s history, three capital ships and 10 more ships of the line were burnt or captured. The Royal Charles, its flagship, was towed away as a prize.

Upnor Castle itself, though poorly provisioned at the time of the Medway raid, fought bravely but to little effect. Samuel Pepys, secretary of the Navy Board at the time, records an eyewitness’s account that the Dutch warships “made no more of Upnor Castle’s shooting, than of a fly”.

After the raid, strengthened fortifications further down the Medway meant that Upnor lost its role in Chatham’s defences. It became an ammunition depot and was still in use by the Royal Navy as late as 1945. After the Second World War it was opened to the public as a museum and is currently managed by English Heritage, though it remains part of the Crown Estate.