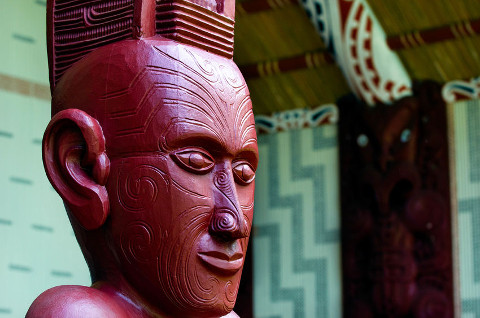 Wooden head carving outside a marae – a traditional Māori meeting-place.

Marae have a high cultural and sacred significance for Māori – they’re spaces where the language can be spoken and where important family, tribal and even intertribal ceremonies can take place. They generally have a wharenui – literally, “large building” – in the middle which can range in size from a double-garage to a large town hall.

As you can see, the head is carved with facial tattoos or tā moko. These were indicators of social status and rank, but were also used to make the wearer attractive to the opposite sex. Tattooists were considered tapu in Māori society – inviolable and sacred.