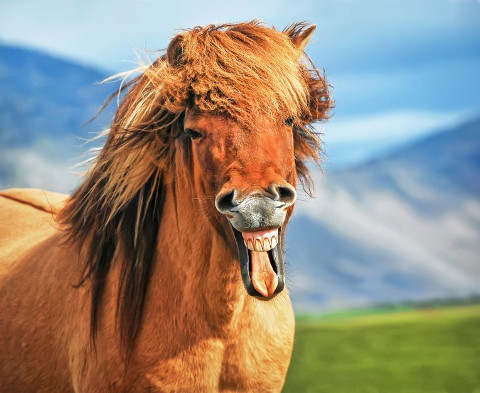 An Icelandic horse. We would ask, “Why the long face?” but that doesn’t seem to apply here.

Aficionados of Father Ted will know that Ted and Dougal’s entry for the Eurosong contest, the song “My Lovely Horse”, contains the words “You’re a pony no more”. And, in fact, although the breed is typically quite small (averaging 13-14 hands), most registries do list it as being a horse rather than a pony.

It’s a hardy breed, well suited to the rugged and difficult terrain of Iceland. It’s also very healthy. This may be partly because Iceland forbids the import of horses, including the re-import of Icelandics taken overseas; and any equine equipment imported must be either new or thoroughly disinfected.

Icelandics have two unique gaits beside the conventional walk, trot and canter/gallop. The tölt is a lateral (ie the two legs on one side move first, then the legs on the other side) ambling (three hooves on the ground at any one time) gait, which is comfortable but can cover a lot of ground and allows for rapid acceleration. The flugskeið or “flying pace” is a fast and (at speed) smooth two-beat lateral gait in which the two hooves on each side hit the ground almost simultaneously; speeds of up to 50 km/h (30 mph) are possible.