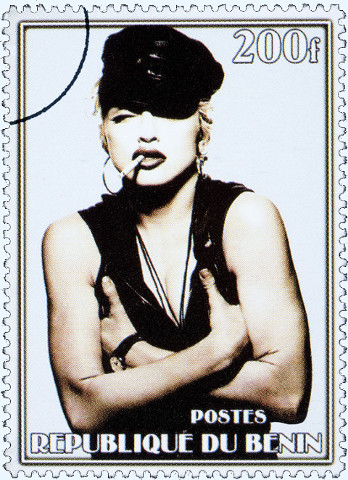 Pop singer Madonna on a Republic of Benin 200 CFA franc stamp, circa 2002. The original portrait was a promotional photo released by her record company Sire in 1990.

Exactly why Benin should have chosen Madge as the subject of a postage stamp isn’t clear. There’s no record of her ever having been to the country, let alone performed there. It seems likely that the stamp was issued as part of a series to generate revenue from collectors.

Commemorative stamps are something of a controversial subject. Adhesive postage stamps were first introduced in 1840 and the hobby of stamp collecting took off not long afterwards – fuelled, and to some extent thwarted, by frequent issues of commemorative stamps. Thwarted, because collectors endeavouring to complete their collections found that new stamps were being issued faster than they could afford to buy them. It got so bad that in 1895 the Society for the Suppression of Speculative Stamps was formed to campaign against excessive issues – but was wound up just two years later because its boycotts failed to win enough support.