April sees the opening of the spring season for horse racing at the Hipódromo de la Zarzuela in Madrid providing a very pleasant, if not so well known, Sunday morning out.

When I first began to ask around what people knew about horse racing in Madrid, many people responded to the tune of: “I didn’t know there was one in Madrid”, “I think it’s closed” or “Yeah, but it’s not very popular”.

The latter is probably true. One of the first things that would strike any racing fan who comes to Spain is that the sport is not very big here. There are at most only ten courses in the whole country. In fact, the course in Madrid was closed for nine years from 1996 when a lack of interest made it economically unviable. When it reopened in 2005 it was to be under state control with the intention of selling it off to private enterprise. There weren’t any takers and it remains to this day effectively a nationalised racecourse run by a number of state bodies including the National Lottery. Here, races are just as likely to be sponsored by the Ministry of Environment and Rural Affairs as they are Vodafone or William Hill. 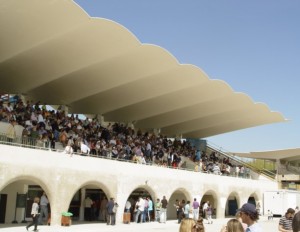 Maybe it doesn’t make much money, but thankfully it’s kept open as part of the national heritage. Situated only ten minutes by bus or car from Madrid city centre, the Hipódromo de la Zarzuela is a charming track with spectacular views across the El Pardo parkland in one direction and to the Madrid city skyline in the other. The impressive Art Deco grandstands, styled on the San Siro in Milan and now being renovated, were built by the engineer Eduardo Torroja for the opening in 1941. And, knowing the weather in Madrid, I was surprised to find the course – in spring at least – is a lush green turf.

We decided to go to the second meeting of the year, in April, when racing takes place every Sunday from 11am to 2pm. From March to June they race on a turf track, changing to sand in July and August when there are also floodlit night races. I say we, as I thought it best to take someone along with some knowhow when it comes to racehorses, especially as I intended to have a flutter on every race. It’s also worth swotting up on the vocab. Even if you consider yourself to be a reasonable Spanish speaker, as I do, I can honestly say that after ten years in Spain I’ve never had cause to know the Spanish for “colt”, “gelding” or “filly”. 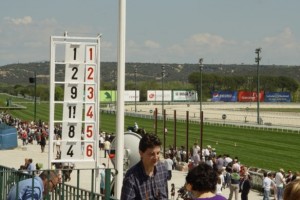 It was a Spanish friend of mine who referred to the races as a bit “elitist”. To be honest, that’s always been my impression of horse racing in general, but I was to be pleasantly surprised by the mix of people on the day I went. There were one or two Barbours and green wellies but no noticeable dress code and a good relaxed atmosphere overall. There are plenty of places to eat and drink, three large grandstands, gardens and playgrounds for the kids.

Mind you, we didn’t have a great deal of time to relax. Determined to get the most out of the price of our tickets, we found ourselves busily trotting from one place to another in an effort to keep up with the six races scheduled for the day…

One Response to “A day at the races in Madrid”